Yoga can be a useful complimentary treatment for those suffering with a serious psychiatry disorder like schizophrenia. Yoga brings significant symptomatic improvements and enhances the quality of life of schizophrenic patients. 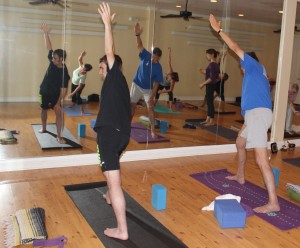 Promising effects of yoga for physical and mental disorders are well known for a long time. Now this beneficial effect is also extended for management of a serious mental illness like schizophrenia.

Schizophrenia is a severe mental disease having a harmful impact on the human body and behavior. It appears in late adolescence or early adulthood. This disease is characterized by presence of positive and negative symptoms and thought disorder. A schizophrenic person shows symptoms of altered awareness, delusion, confusion, agitation, social withdrawal and psychosis.
A person can hear voices or see things, which are not there and thinks that things are controlled from outside. In severe conditions, a person may have unusual thoughts or perceptions, disorders of movement, difficulty in speaking or expressing emotions, problem with attention, memory and organization. Such psychopathology leads an adverse impact on quality of life and social function of an affected patient.
Schizophrenia itself hampers the physical activity and eating patterns of a patient. Along with that, use of treatment medication may lead to other health issues such as obesity, type 2 diabetes and heart disease.
Chemical imbalance in the brain is thought as a major probable reason for occurrence of schizophrenia. Relapses are commonly seen, even with patients on medication.
Treatments for schizophrenia can be a challenge, and most often patients exhibit a shortfall in cognitive and social functioning despite the use of modern treatments. The effectiveness of yoga is already proven in other psychiatric disorders like depression and anxiety. Likewise, yoga proves to improve the well-being of a schizophrenic. Yoga, a combination of physical activity and relaxation, creates a balance between body, thoughts and emotions and can help cope with psychiatric symptoms.

Studies assessing the effectiveness of yoga as a complimentary treatment showed a beneficial impact in improving positive and negative symptoms and enhancing health-related quality of life of schizophrenic patients.
A pilot study published in The Journal of Alternative and Complementary Medicine tested the effects of yoga on schizophrenic patients. Researchers offered an 8-week yoga therapy program which included postures, breathing exercises and relaxation. Schizophrenic patients showed great improvement in symptoms and a decrease in negative thoughts. Yoga therapy also improves quality of life and is proven as a beneficial adjunctive treatment for those suffering from schizophrenia.

Role of Yoga in Schizophrenia

Self-awareness
One of the significant benefits of yoga is an increase in body awareness and achievement of state of self-realization. This helps the schizophrenic patient to distinguish the reality from delusion, hallucination and negative thought.
Stress Reduction
Relaxation techniques such as deep breathing and meditation can help reduce stress. Yoga soothes the fight-or-flight-response (aggressive response from the body) and stimulates a relaxation response, which calms down the mind and brings the body back into a state of balance.
Create Energy
Pranayama, a science of breath, awakens internal energy of the body. An increase of energy levels help to refresh and rejuvenate the body. Thus, yoga is an amazing way to de-stress.
Deal with Coexisting Health Risks
Stretching and strengthening effects of yoga postures bring flexibility and balance within the internal system of the body. This is helpful to bring coordination within functioning of different body organs. Additionally, increase in self-awareness makes a person adapt and stick to a healthy lifestyle. All this takes care of any related health issues like obesity, diabetes and heart disease.
Proper medication and social support are additional aids in treatment of schizophrenia to achieve the best result.
References:
• Yoga therapy for Schizophrenia.
• Yoga Therapy as an Adjunctive Treatment for Schizophrenia: A Randomized, Controlled Pilot Study.